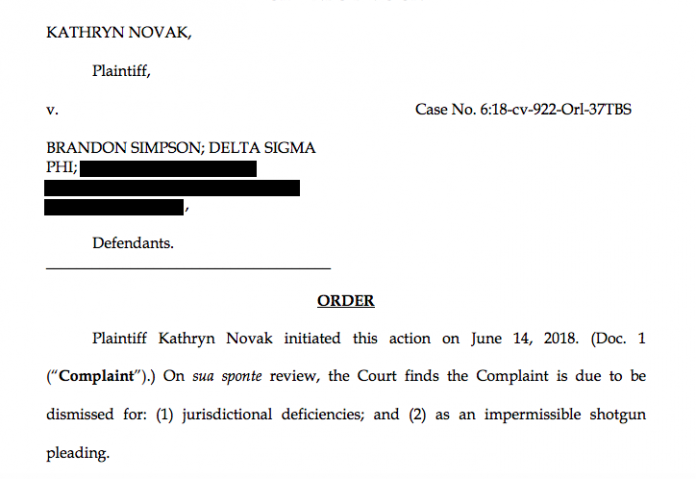 The attorney taking on the President of the United States in porn-star Stormy Daniels’ lawsuit just suffered a major loss in a separate lawsuit against a UCF fraternity — for mistakes a federal judge said were “altogether unacceptable” in a scathing order throwing out the case.

The fraternity in question is the University of Central Florida’s Delta Sigma Phi; however, Avenatti failed to provide sufficient proof of residency for the defendants, with the judge declaring that the Plaintiff alleged Florida citizenship based “[u]pon information and belief”, and that “‘information and belief will not do”. Avenatti simply presumed the defendants’ citizenship based upon their enrollment at the University of Central Florida alone.

A shotgun complaint is defined in the order as “‘[one] containing multiple counts where each count adopts the allegations of all preceding counts, causing each successive count to carry all that came before and the last count to be a combination of each complaint.” The judge took issue with this organizational problem because it forced him to undertake the “onerous task of sifting out irrelevancies to determine which facts are relevant to which causes of action.”

Avenatti was given a chance to amend the filed suit in order to meet the basic qualifications, with the judge stating that “the amended complaint must have factual support for the assertion that the individual defendants are citizens of Florida.”

It’s unclear why the lawsuit contains this conflicting information.