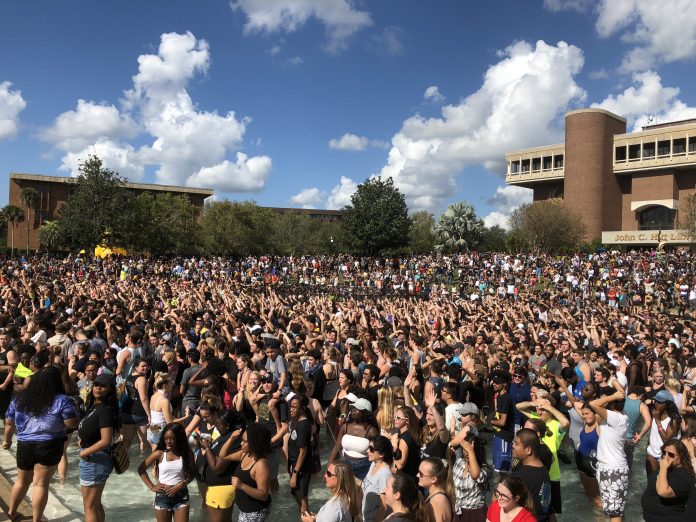 Thousands of students gathered at the Reflecting Pond for this year’s Spirit Splash.

Spirit Splash was awarded “Best Campus Tradition” in 2011 by the National Association for Campus Activities and is one of UCF’s oldest and best-known traditions.

This year, UCF’s new president, Dale Whittaker, made a splash.

“I think it’s so amazing that President Whittaker is going to be throwing ducks, and the lucky students are going to be going to dinner with him,” Homecoming Concert Director Kayla Beamon said.

President Whittaker threw 40 special signed ducks this year. The lucky recipients of the ducks will be dining with him and his family at his home next semester and will also score limited edition T-shirts. Amongst the commotion, President Whittaker had some tips for students.

“Keep your knees high, stay out I front, have big people behind you and wash your feet as soon as you get out,” President Whittaker said.

By 9 a.m., tons of students were already lined up to receive this year’s Spirit Splash T-shirts and by 10 a.m., hundreds were gathers around the pond ready to fight for ducks.

UCF football players were also in attendance, encouraging students to come out tomorrow for the game against Navy. Kickoff is at noon.

The first documented Spirit Splash occurred in 1997, and it wasn’t much different than the event today, featuring football players, cheerleaders and the Marching Knights.

However, with the UCF football team claiming a national championship in 2017 and riding out a 21-0 record, morale is definitely up at UCF.