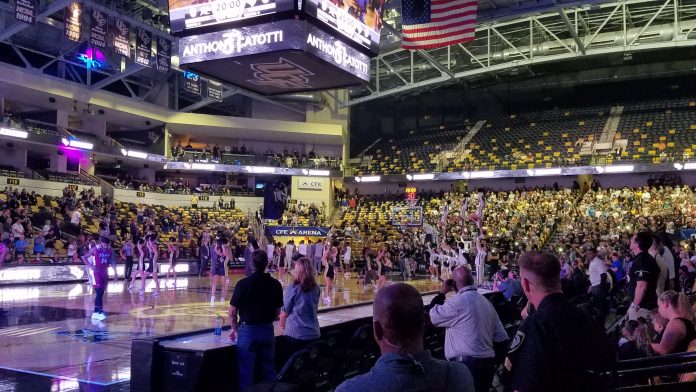 Nov. 6 marked the first day of the UCF men’s basketball season and the Knights charged on to a victory over the Rider Broncs 84-70.

The energy in the building was electrifying. The “Knightmare” (basketball student section) gave the Knights an advantage throughout the game. Should this energy continue throughout the season, home games at the CFE Arena might be an intimidating place to play for opposing teams.

Students and the Orlando community alike came out to the knights first game. While the students comedically danced on the jumbotron, team started the game a little sluggish.

But BJ Taylor’s veteran skill was on display by keeping the team composed through their roller coaster performance and scored 22 points to help his team win.

Aubrey Dawkins hasn’t scored an official basket in 2 years (due to injuries and transfer rules) showed glimpses of a first team all American conference candidate with 16 points and 10 rebounds.

Terrell Allen displayed his play-making ability and willingness to score with his 13 points and 5 assists.

Collin Smith turned a lot of heads with his overall performance, putting up a double-double (14 points and 13 rebounds), but worried many with his subpar free throw shooting (6-15 from the free throw line).

Many fans and basketball fanatics were excited to witness Tacko Fall play, but he did not dominate the game like some in the audience may have hoped. The Senegal native wasn’t efficient offensively but did make his presence felt defensively with 5 blocks. During the game, Fall recorded his 200th career block.

Fall is still recovering from a past shoulder injury and is expected to get better as the season goes on. The bench of the UCF knights looked exceptional highlighting Dayon Griffin, Chad Brown, Caesar DeJesus, and Chance McSpadden’s off-bench production providing valuable reinforcements for the starting five.

A wealth of excitement grows for “Orlando’s hometown team” and fans hope that the momentum will continue throughout the whole season and eventually to the NCAA march madness tournaments.