Tacko Fall will sit out of Friday’s game against Toronto due to NBA concussion protocol, the Celtics announced in a tweet Thursday.

The former UCF center told MassLive reporter John Karalis he hit his head on a ceiling he failed to see after washing his hands in a bathroom after practice at Wells Fargo Center in Philadelphia.

The 7-foot-5 center told the MassLive reporter he went on about his day Friday, attending the Celtics swim lesson event at the Charlestown Boys and Girls Club with no noticeable effects, but head coach Brad Stevens told the reporter Fall woke up Saturday feeling “under the weather.”

Fall was forced into the NBA concussion protocol, a policy designed to safeguard the neurological health of NBA players.

The 2019-20 NBA Concussion Policy states the player must meet the following requirements to be eligible to participate:

Fall participated with the team in the morning shootaround before the season opener Wednesday, and Stevens told the MassLive reporter he expects Fall to be cleared “real soon.”

This is a developing story. Check back with Knight News for updates, 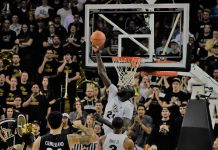