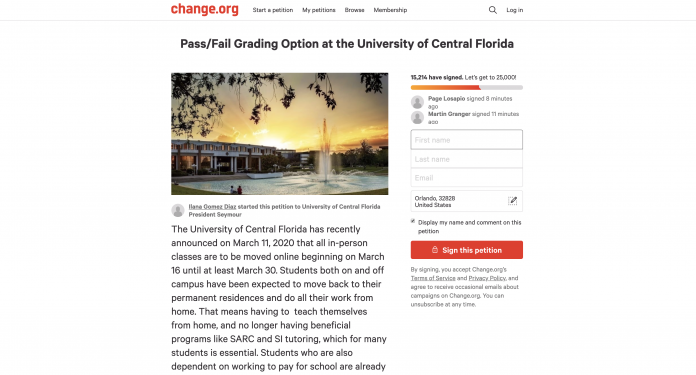 More than 15,000 individuals have signed a petition voicing to UCF they support the option of a pandemic grading scale.

The petition proposes the optional pass, fail grading system could be used in place of passing or failing letter grade in a traditional grading scale.

“Students, at the end of the semester, can choose to keep their letter grades on their transcript, or they can choose a grade of pass or fail that would still count towards their degree completion,” the petition proposes in the description.

The petition — created on March 17 — was started after the Florida Board of Governors released a statement advising state universities to transition to remote learning six days prior.

UCF does not currently have a grading scale like this — according to the Academic Regulations and Procedures website, UCF has the option of “satisfactory.”

Ilana Gomez Diaz, sophomore biomedical sciences major and creator of the petition, said the petition asks UCF to understand students have other things to worry about besides receiving letter grades of A’s.

“I know a lot of students have lost jobs because of [COVID-19] and it’s just stressful for a lot of people right now,” she said. “Online is not the same type of atmosphere to when you’re in person.”

The petition proposes that students be given the option to choose to keep their letter grades on their transcripts or to use the pass or fail option toward their degree completion.

Currently, out-of-state universities like the Massachusetts Institute of Technology and Carnegie Mellon have converted to pandemic grading amidst COVID-19 university closures.

Students at the University of Florida have created a petition asking their university to do the same.

According to UF’s application for S/U Grade Option, the S/U Option allows a student to take a course and receive a grade of S to imply satisfactory or U or unsatisfactory, if the application is submitted by the published deadline.

The grade becomes part of the student’s record but does not count in the grade point average as computed by the University of Florida.

For Yamina Sfiat, junior criminal justice and political science double major, the transition to remote learning at UCF is something she’s worried about due to her living situation, she said.

“I’ve never done online classes before,” Sfiat said, “I have to be on campus for me to focus. We have tens of thousands of students that go to this campus — we don’t know the situation in every family environment or if they even have one.”

The transition to remote learning — which officially began March 16 and removed all campus-based courses in hopes of stopping the spread of the virus — brings the previously reported online total enrollment of just over 5,600 students to the entire student population, according to the 2019-20 UCF Fast Facts.

The option of a pass or fail grade is said to benefit students who will no longer have access to programs like the Student Academic Resource Center and Supplemental Instruction sessions in-person, the petition said.

SARC — which provides academic support programs, including supplemental instruction, tutoring, academic advising, and other services — is able to provide services online, according to its website.

“The [9%] of students who live out of state or internationally will now have to deal with time change, and for some, classes might be inconveniently held in the middle of the night which will also affect their academic performance,” the petition states.

“As decisions are made at the state and university levels, we’re regularly sharing that information with our campus community,” Gilmartin said in a Saturday email. “When we have more information to share, we will.”

It is expected the official direction will come from the Board of Governors, the body which oversees the 12 schools in the State University System.

“We, as students, thank UCF for prioritizing our health over all else,” the petition reads. “[We] hope that you will take into consideration this petition.”